In the post World War II era, De Kooning painted in a style that came to be referred to variously as Abstract expressionism, Action painting, and the New York School. Other painters that developed this school of painting include Jackson Pollock, Franz Kline, Arshile Gorky, Mark Rothko, Hans Hofmann, Robert Motherwell, Philip Guston and Clyfford Still among others.

De Kooning's parents, Leendert de Kooning and Cornelia Nobel, were divorced when he was about five years old, and he was raised by his mother and a stepfather. His early artistic training included eight years at the Rotterdam Academy of Fine Arts and Techniques. In the 1920s he worked as an assistant to the art director of a Rotterdam department store.

In 1926, De Kooning entered the United States as a stowaway on a British freighter, the SS Shelly, to Newport News, Virginia. He then went by ship to Boston, and took a train from Boston to Rhode Island, and eventually settled in Hoboken, New Jersey, where he supported himself as a house painter until moving to a studio in Manhattan in 1927. In 1929 he met the artist and critic John D. Graham, who would become an important stimulus and supporter. He also met the painter Arshile Gorky, who became one of De Kooning's closest and most influential friends.


In October 1935, De Kooning began to work on the WPA (Works Progress Administration) Federal Art Project, and he won the Logan Medal of the arts while working together with Colombian Santiago Martínez Delgado. They were employed by this work-relief program until July 1937, when they resigned because of their alien status. This period of about two years provided the artist, who had been supporting himself during the early Depression by commercial jobs, with his first opportunity to devote full time to creative work. He worked on both the easel-painting and mural divisions of the project (the several murals he designed were never executed).

In 1938, probably under the influence of Gorky, De Kooning embarked on a series of male figures, including Two Men Standing, Man, and Seated Figure (Classic Male), while simultaneously embarking on a more purist series of lyrically colored abstractions, such as Pink Landscape and Elegy. As his work progressed, the heightened colors and elegant lines of the abstractions began to creep into the more figurative works, and the coincidence of figures and abstractions continued well into the 1940s. This period includes the representational but somewhat geometricized Woman and Standing Man, along with numerous untitled abstractions whose biomorphic forms increasingly suggest the presence of figures. By about 1945 the two tendencies seemed to fuse perfectly in Pink Angels.

In 1938, De Kooning met Elaine Marie Fried, later known as Elaine de Kooning, whom he married in 1943. She also became a significant artist. During the 1940s and thereafter, he became increasingly identified with the Abstract Expressionist movement and was recognized as one of its leaders in the mid-1950s. He had his first one-man show, which consisted of his black-and-white enamel compositions, at the Charles Egan Gallery in New York in 1948 and taught at Black Mountain College in North Carolina in 1948 and at the Yale School of Art in 1950/51.

In 1946, too poor to buy artists' pigments, he turned to black and white household enamels to paint a series of large abstractions; of these works, Light in August (c. 1946) and Black Friday (1948) are essentially black with white elements, whereas Zurich (1947) and Mailbox (1947/48) are white with black. Developing out of these works in the period after his first show were complex, agitated abstractions such as Asheville (1948/49), Attic (1949), and Excavation (1950; Art Institute of Chicago), which reintroduced color and seem to sum up with taut decisiveness the problems of free-associative composition he had struggled with for many years.

De Kooning had painted women regularly in the early 1940s and again from 1947 to 1949. The biomorphic shapes of his early abstractions can be interpreted as female symbols. But it was not until 1950 that he began to explore the subject of women exclusively. In the summer of that year he began Woman I (located at the Museum of Modern Art, New York City), which went through innumerable metamorphoses before it was finished in 1952.

During this period he also created other paintings of women. These works were shown at the Sidney Janis Gallery in 1953 and caused a sensation, chiefly because they were figurative when most of his fellow Abstract Expressionists were painting abstractly and because of their blatant technique and imagery. The appearance of aggressive brushwork and the use of high-key colors combine to reveal a woman all too congruent with some of modern man's most widely held sexual fears. The toothy snarls, overripe, pendulous breasts, vacuous eyes, and blasted extremities imaged the darkest Freudian insights. Some of these paintings also seemed to hearken back to early Mesopotamian / Akkadian works, with the large, almost "all-seeing" eyes.

The Woman' paintings II through VI (1952-53) are all variants on this theme, as are Woman and Bicycle (1953; Whitney Museum of American Art, New York) and Two Women in the Country (1954). The deliberate vulgarity of these paintings contrasts with the French painter Jean Dubuffet's no less harsh Corps de Dame series of 1950, in which the female, formed with a rich topography of earth colours, relates more directly to universal symbols.

From the late 1950s to the early 1960s, De Kooning entered a new phase of nearly pure abstractions more related to landscape than to the human figure. These paintings, such as "Bolton Landing" (1957) and "Door to the River" (1960) bear broad brushstrokes and calligraphic tendencies similar to works of his contemporary Franz Kline.

In 1963, De Kooning moved permanently to East Hampton, Long Island, and returned to depicting women while also referencing the landscape in such paintings as Woman, Sag harbor and Clam Diggers.

Willem de Kooning was diagnosed with, in all probability, Alzheimer's disease. After his wife, Elaine, died on February 1, 1989, his daughter, Lisa, and his lawyer, John Eastman were granted guardianship over De Kooning. As the style of his later works continued to evolve into early 1989, his vintage works drew increasing profits; at Sotheby's auctions Pink Lady (1944) sold for US$3.6 million in 1987 and Interchange (1955) brought $20.6 million in 1989.

There is much debate over the relevance and significance of his 1980s paintings, many of which became clean, sparse, and almost graphic, while alluding to the biomorphic lines of his early works. Some have said his very last works, most of which have never been exhibited, present a new direction of compositional complexity and daring color juxtapositions, Some speculate that his mental condition and attempts to recover from a life of alcoholism had rendered him unable to carry out the mastery indicated in his early works, while others see these late works as boldly prophetic of directions that some current painters continue to pursue. Unfortunately, gossip has tainted the scant critical commentary afforded these last works, which have yet to be seriously assessed. 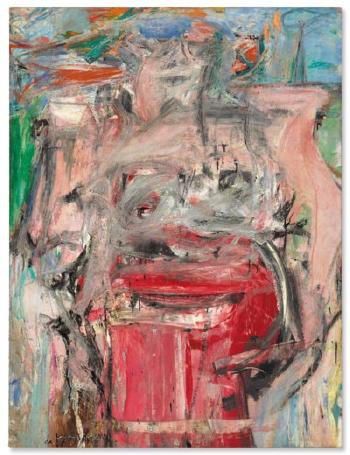 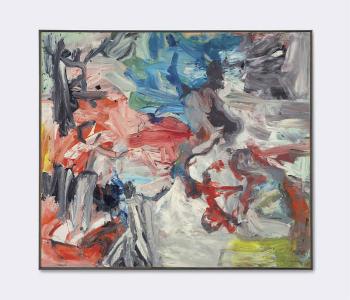 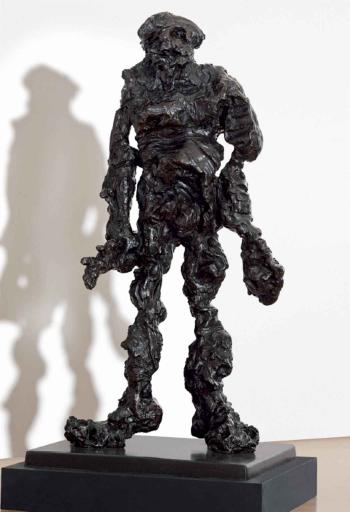 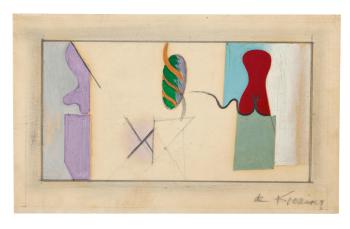 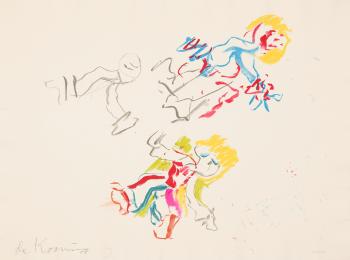 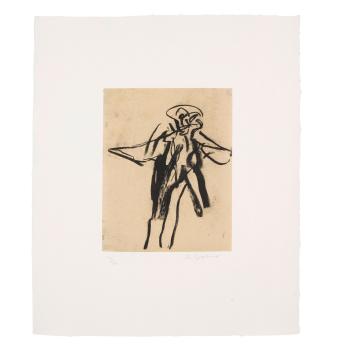 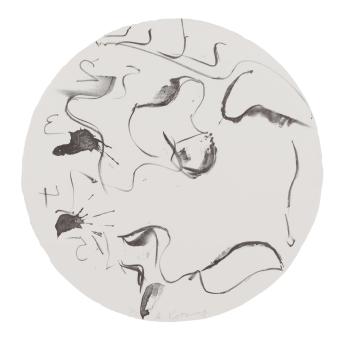 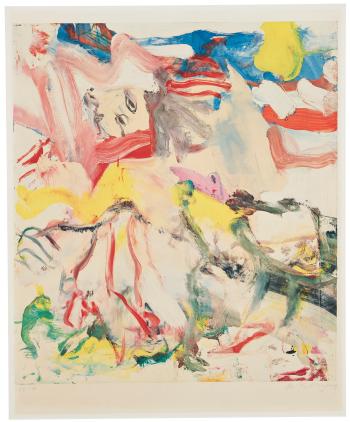 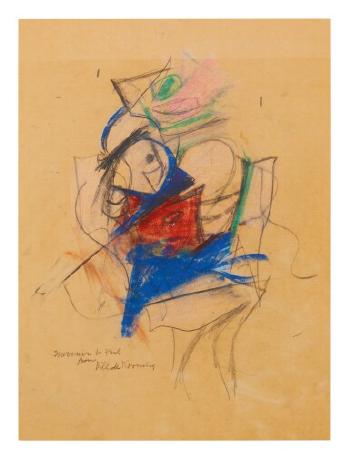 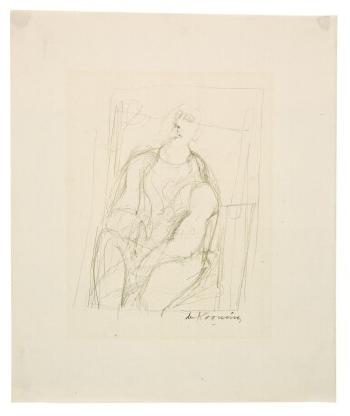 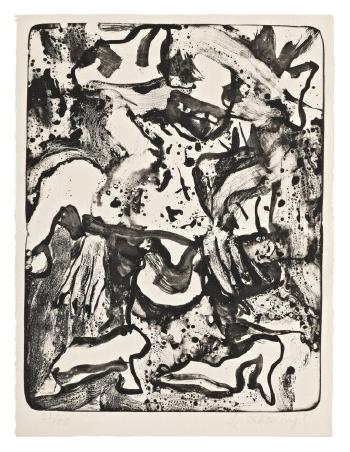