Josef Albers (1888-1976), a German-born artist, became a naturalized American in 1939. Known as a pioneering abstractionist, color theorist, and one of the most influential art teachers of the twentieth century, Joseph Albers started out as a grade school teacher and figurative artist. While during his lifetime he kept his early work mostly secret, he started out as a portraitist and a draftsman of considerable rigor and flair whose subject matter included the local architecture, ranging from grim miners' houses to impressive church facades, and landscape of his native Westphalia (he was born in Bottrop, an industrial city in the Ruhr); farm animals, among them enchanting and playful studies of rabbits and ducks; and ballet dancers, whom he drew in an exceptionally light and minimal style. While studying art and the teaching of art in Berlin between 1913 and 1915, he also painted a series of still-lifes, in oil on canvas that demonstrated his early interested in issues of spatial play, simultaneous symmetry and asymmetry, and the reversal of forms. He became a print maker, trying every medium available to him, and created windows of stained glass. In 1919, he went to continue his studies in Munich under Franz Stuck-the teacher he would subsequently discuss with his colleagues Paul Klee and Wassily Kandinsky. Here he did a series of bold brush-and-ink studies of nude figures as well as of Bavarian scenery.

In 1920 Albers entered the Bauhaus, which had opened in Weimar during the previous year. He began to make assemblages of glass from detritus he found at the local dump, and he also designed some extremely streamlined and elegant furniture for the waiting room outside the office of Walter Gropius, the Director of the pioneering art school. In 1923 he began to conduct the preliminary course in material and design, and in 1925 he was the first student to be elevated to the status of Bauhaus master. That same year he married Annelise Fleischman, a weaving student and eventually a textile artist of world renown; they would be together for the rest of his life.

At the Bauhuas Albers became an abstract artist of considerable bravura and originality. By the time the school moved to its new building in Dessau in 1925, his preferred medium was stained glass, for which he developed a technique of sand-blasting that enabled him to make a series of highly rhythmic compositions based on solid expanses of color cut at right angles and penetrated by light. In his teaching as well as his own work, he was increasingly intrigued by the idea of deception in art- "the discrepancy of physical fact and psychic effect," to use one of his favorite phrases-as well as by the possibilities of pure form and color to create art that bore no characteristics of the time or place in which it was made. He began to write texts on visual experience, as he would for the rest of his life, and to have a major influence as a teacher.

Additionally, Albers became a photographer of great importance. This, too, was a side of his work that he subsequently minimized, but at the Bauhaus he took important portrait photographs of, among others, Schlemmer, Kandinsky, Klee, and Anni Albers (she shortened her first name and took her husband's last name at the time of their marriage) and made a series of photo-collages in which he juxtaposed large and small images, often closely related, to create the sort of highly charged rhythm that became a pre-occupation of his work.

Albers was one of the few remaining faculty members at the Bauhaus in its final stages in Berlin, to which the school moved in 1932 after the Dessau government ceased paying faculty salaries. The political climate was increasingly hostile to modernism, and the faculty closed the institution in the spring of 1933 after the Nazis padlocked the door. That summer, Anni and Josef Albers were invited to the recently formed Black Mountain College in North Carolina, where Albers was the head of the art department and art was to be considered central to the curriculum. He arrived in America on November 28, 1933. Albers immediately began to teach-his students at Black Mountain would include some of the most significant American artists of their generation, among them Robert Rauschenberg- and to continue his efforts at printmaking, where he began to make woodcuts and linoleum cuts of original and rather playful abstract forms. His paintings took off in new directions, with bold abstract oils that often used unmixed paint, straight from the tube, to create powerful biomorphic and anthropomorphic, yet nonrepresentative, forms. With his wife, Albers began, in 1934, to travel to Mexico (he would make fourteen trips in all), which exerted a tremendous influence on his color sensibility as well as his interest in vague spiritual presence in his art and his concern for the way that every aspect of our visual environment affects our daily lives. He continued his photography in the face of some of the greatest sites of pre-Columbian culture. He gave important lectures at the Lyceum in Havana, Cuba; at the Graduate School of Design at Harvard University; and elsewhere. He began to show in major American museums as well as in art galleries that specialized in modernism, and was a major supporter of the movement towards abstraction, now with increasingly hard edges (although always with obviously hand-drawn lines): the Biconjugates, the Kinetics, and the Variants.

This last series demonstrates many of the points about color effects and mutability with which Albers was becoming increasingly preoccupied, the same exact paint was made to look different in different settings. Equal quantities of various colors gave the illusion of being larger or smaller than one another. The motion of the panels was simultaneously two-dimensional and three-dimensional, moving to the left and right of the flat surface and at the same time penetrating its depths. The work was both optically entertaining and intensely poetic, diverting and at the same time profound.

In 1950, Albers became chairman of the Department of Design at Yale University, where he would hold a number of important academic positions and exert more and more influence as a teacher. He increased his lecturing in America and abroad, and began work on his major color treatise, done in collaboration with his students, called Interaction of Color. That same year, at age sixty-two he started the series of paintings for which he is best known, and which he continued for the rest of his life, the Homages to the Square. For these oils on panel, as well as for the related prints, Albers developed precise arrangements of nested squares of solid colors, centered along the vertical axis but weighed downward along the horizontal axis. The resulting paintings move in seemingly contradictory directions at the same time and creatoia series of color effects. Perfectly flat surfaces appear shaded and modulated. As with the Variants, the same color appears completely unlike itself when its setting changes. The warmth and coolness of colors, both on their own and in relation to one another, is revealed as having great importance. Albers called these paintings "platters to serve color;" color became his religion, a source of knowledge and mystery, a vehicle for discovery.

By the time Josef Albers died at age eight-eight in 1976, his painting, teaching, and writing has achieved worldwide recognition. In 1971 he was the first living artist to have a solo retrospective exhibition at the Metropolitan Museum of Art in New York. He was awarded major medals and thirteen honorary doctorates. His work became the basis of large murals inside and outside important buildings in Australia, Germany, and the U.S. After his death, one of his paintings was used on a U.S. postage stamp, of which there were 170 million printed, with the slogan of the Department of Education: "Learning Never Ends." A Josef Albers Museum was created in Bottrop, Germany, and his work entered the collections of most major museums of modern art around the world. Documentary films were made; books and articles proliferated. Indeed, Albers achieved the dream he voiced upon his arrival in America: "to open eyes." 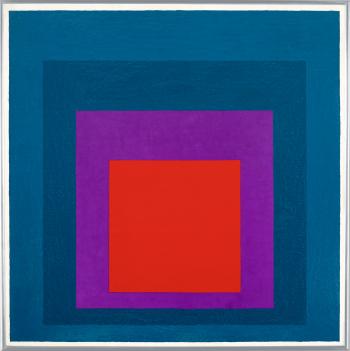 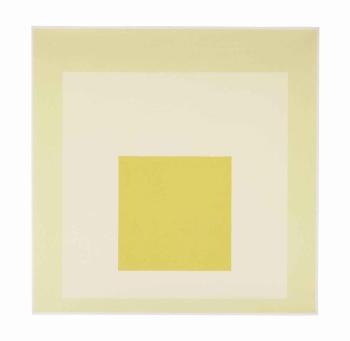 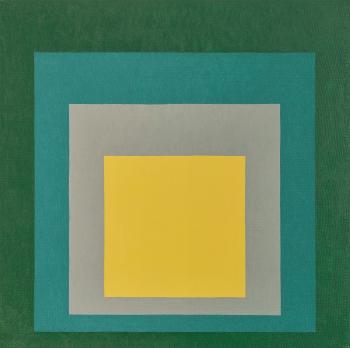 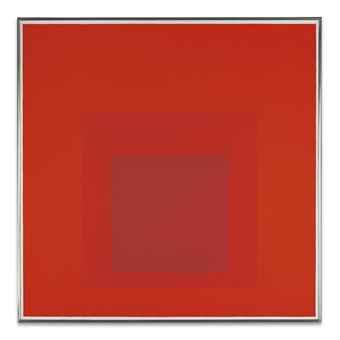 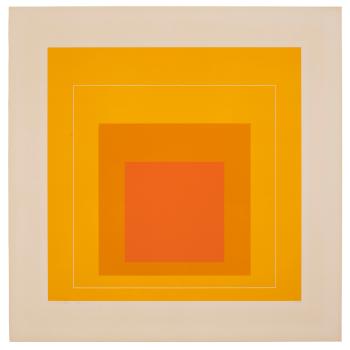 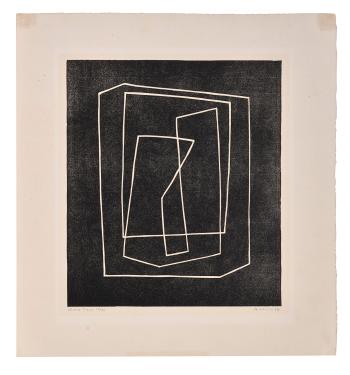 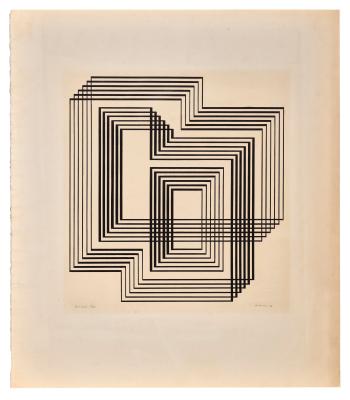 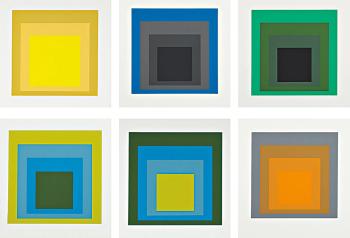 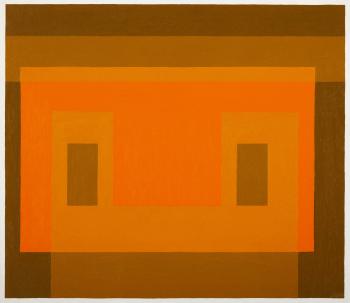 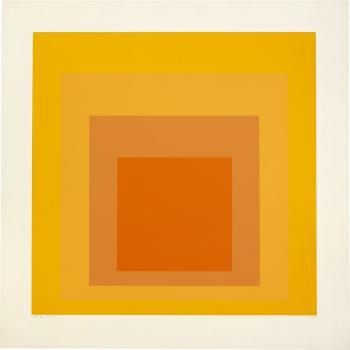 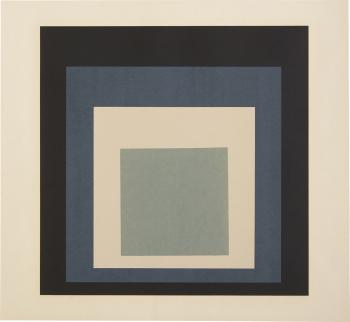 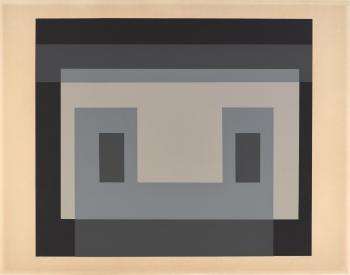 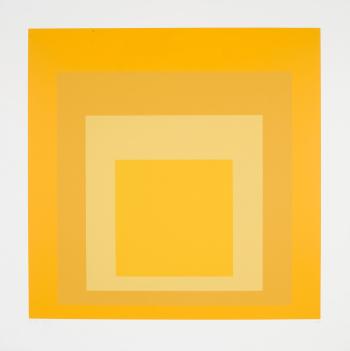