Claude Monet  also known as Oscar-Claude Monet or Claude Oscar Monet (November 14, 1840 – December 5, 1926) was a founder of French impressionist painting, and the most consistent and prolific practitioner of the movement's philosophy of expressing one's perceptions before nature, especially as applied to plein-air landscape painting. The term Impressionism is derived from the title of his painting Impression, Sunrise.

Monet was born on November 14, 1840 on the fifth floor of 45 rue Laffitte, in the ninth arrondissement of Paris. He was the second son of Claude-Adolphe and Louise-Justine Aubrée Monet, both of them second-generation Parisians. On May 20, 1841, he was baptized in the local parish church, Notre-Dame-de-Lorette as Oscar-Claude. In 1845, his family moved to Le Havre in Normandy. His father wanted him to go into the family grocery store business, but Claude Monet wanted to become an artist. His mother was a singer.

On the first of April 1851, Monet entered the Le Havre secondary school of the arts. He first became known locally for his charcoal caricatures, which he would sell for ten to twenty francs. Monet also undertook his first drawing lessons from Jacques-François Ochard, a former student of Jacques-Louis David. On the beaches of Normandy in about 1856/1857 he met fellow artist Eugène Boudin who became his mentor and taught him to use oil paints. Boudin taught Monet "en plein air" (outdoor) techniques for painting.

On 28 January 1857 his mother died. He was 16 years old when he left school, and went to live with his widowed childless aunt, Marie-Jeanne Lecadre.

Paris
When Monet traveled to Paris to visit The Louvre, he witnessed painters copying from the old masters. Monet, having brought his paints and other tools with him, would instead go and sit by a window and paint what he saw. Monet was in Paris for several years and met several painters who would become friends and fellow impressionists. One of those friends was Édouard Manet.

In June of 1861 Monet joined the First Regiment of African Light Cavalry in Algeria for two years of a seven-year commitment, but upon his contracting typhoid his aunt Madame Lecadre intervened to get him out of the army if he agreed to complete an art course at a university. It is possible that the Dutch painter Johan Barthold Jongkind, whom Monet knew, may have prompted his aunt on this matter. Disillusioned with the traditional art taught at universities, in 1862 Monet became a student of Charles Gleyre in Paris, where he met Pierre-Auguste Renoir, Frédéric Bazille, and Alfred Sisley. Together they shared new approaches to art, painting the effects of light en plein air with broken color and rapid brushstrokes, in what later came to be known as Impressionism.

Monet's 1866 Camille or The Woman in the Green Dress (La Femme à la Robe Verte), which brought him recognition, was one of many works featuring his future wife, Camille Doncieux. Shortly thereafter Doncieux became pregnant and bore their first child, Jean. In 1868, due to financial reasons, Monet attempted suicide by throwing himself into the Seine.

Franco-Prussian War, Impressionism, and Argenteuil
After the outbreak of the Franco-Prussian War (July 19, 1870), Monet took refuge in England in September 1870.While there, he studied the works of John Constable and Joseph Mallord William Turner, both of whose landscapes would serve to inspire Monet's innovations in the study of color. In the Spring of 1871, Monet's works were refused to be included in the Royal Academy exhibition.

In May 1871 he left London to live in Zaandam, where he made 25 paintings (and the police suspected him of revolutionary activities). He also had a first visit to nearby Amsterdam. In October or November 1871 he returned to France. Monet lived from December 1871 to 1878 at Argenteuil, a village on the Seine near Paris, and here he painted some of his best known works. In 1874, he briefly returned to Holland.

In 1872 (or 1873), he painted Impression, Sunrise (Impression: soleil levant) depicting a Le Havre landscape. It hung in the first Impressionist exhibition in 1874 and is now displayed in the Musée Marmottan-Monet, Paris. From the painting's title, art critic Louis Leroy coined the term "Impressionism", which he intended to be derogatory, however the Impressionists appropriated the term for themselves.

Monet and Camille Doncieux had married just before the war (June 28, 1870) and, after their excursion to London and Zaandam, they had moved into a house in Argenteuil near the Seine River in December 1871. She became ill in 1876. They had a second son, Michel, on March 17, 1878, (Jean was born in 1867). This second child weakened her already fading health. In that same year, he moved to the village of Vétheuil. At the age of thirty-two, Madame Monet died on 5 September 1879 of tuberculosis; Monet painted her on her death bed.

After several difficult months following the death of Camille, a grief stricken Monet (resolving never to be mired in poverty again) began in earnest to create some of his best paintings of the 19th century. During the early 1880's Monet painted several groups of landscapes and seascapes in what he considered to be campaigns to document the French countryside. His extensive campaigns evolved into his series' paintings.

Camille Monet became ill with tuberculosis in 1876. Pregnant with her second child she gave birth to Michel Monet in March 1878. In 1878 the Monet's temporarily moved into the home of Ernest Hoschedé, (1837-1891), a wealthy department store owner and patron of the arts. Both families then shared a house in Vétheuil during the summer. After her husband was bankrupted, and left in 1878 for Belgium, and after the death of Camille in September 1879, and while Monet continued to live in the house in Vétheuil; Alice Hoschedé helped Monet to raise his two sons, Jean and Michel, by taking them to Paris to live alongside her own six children. They were Blanche, Germaine, Suzanne, Marthe, Jean-Pierre, and Jacques. In the spring of 1880 Alice Hoschedé and all the children left Paris and rejoined Monet still living in the house in Vétheuil. In 1881 all of them moved to Poissy which Monet hated. From the doorway of the little train between Vernon and Gasny he discovered Giverny. In April 1883 they moved to Vernon, then to a house in Giverny, Eure, in Upper Normandy, where he planted a large garden where he painted for much of the rest of his life. Following the death of her estranged husband, Alice Hoschedé married Claude Monet in 1892.

At the beginning of May 1883, Monet and his large family rented a house and two acres from a local landowner. The house was situated near the main road between the towns of Vernon and Gasny at Giverny. There was a barn that doubled as a painting studio, orchards and a small garden. The house was close enough to the local schools for the children to attend and the surrounding landscape offered an endless array of suitable motifs for Monet's work. The family worked and built up the gardens and Monet's fortunes began to change for the better as his dealer Paul Durand-Ruel had increasing success in selling his paintings. By November 1890 Monet was prosperous enough to buy the house, the surrounding buildings and the land for his gardens. Within a few years by 1899 Monet built a greenhouse and a second studio, a spacious building, well lit with skylights. Beginning in the 1880s and 1890s, through the end of his life in 1926, Monet worked on "series" paintings, in which a subject was depicted in varying light and weather conditions. His first series exhibited as such was of Haystacks, painted from different points of view and at different times of the day. Fifteen of the paintings were exhibited at the Durand-Ruel in 1891. He later produced several series' of paintings including: Rouen Cathedral, Poplars, the Houses of Parliament, Mornings on the Seine, and the Water Lilies that were painted on his property at Giverny.

Monet was exceptionally fond of painting controlled nature: his own gardens in Giverny, with its water lilies, pond, and bridge. He also painted up and down the banks of the Seine.

Between 1883 and 1908, Monet traveled to the Mediterranean, where he painted landmarks, landscapes, and seascapes, such as Bordighera. He painted an important series of paintings in Venice, Italy, and in London he painted two important series — views of Parliament and views of Charing Cross Bridge. His wife Alice died in 1911 and his oldest son Jean, who had married Alice's daughter Blanche, Monet's particular favourite, died in 1914.[4] After his wife died, Blanche looked after and cared for him. It was during this time that Monet began to develop the first signs of cataracts.

During World War I, in which his younger son Michel served and his friend and admirer Clemenceau led the French nation, Monet painted a series of Weeping Willow trees as homage to the French fallen soldiers. Cataracts formed on Monet's eyes, for which he underwent two surgeries in 1923. The paintings done while the cataracts affected his vision have a general reddish tone, which is characteristic of the vision of cataract victims. It may also be that after surgery he was able to see certain ultraviolet wavelengths of light that are normally excluded by the lens of the eye, this may have had an effect on the colors he perceived. After his operations he even repainted some of these paintings, with bluer water lilies than before the operation.

Monet died of lung cancer on December 5, 1926 at the age of 86 and is buried in the Giverny church cemetery. Monet had insisted that the occasion be simple; thus about fifty people attended the ceremony.

His famous home and garden with its waterlily pond were bequeathed by his heirs to the French Academy of Fine Arts (part of the Institut de France) in 1966. Through the Fondation Claude Monet, the home and gardens were opened for visit in 1980, following refurbishment. In addition to souvenirs of Monet and other objects of his life, the home contains his collection of Japanese woodcut prints. The home is one of the two main attractions of Giverny, which hosts tourists from all over the world. 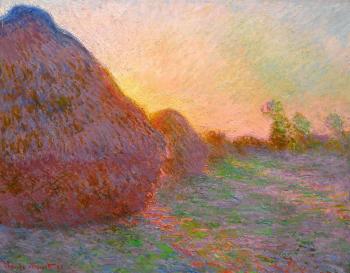 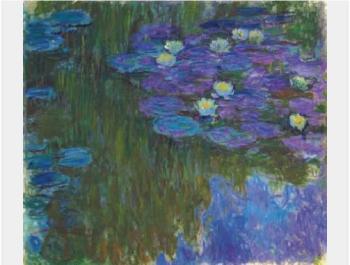 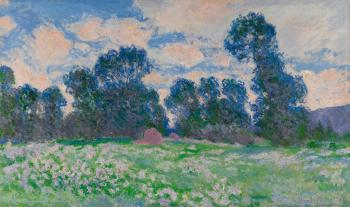 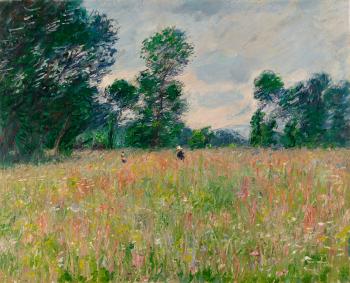 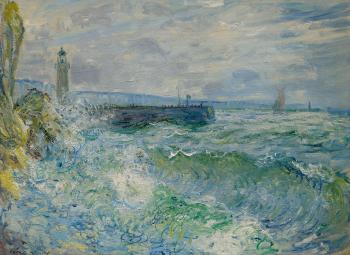 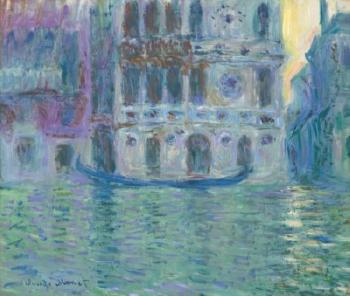 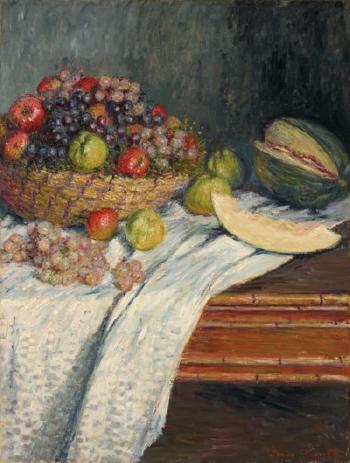 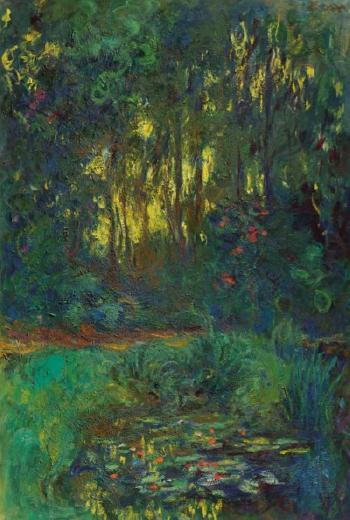 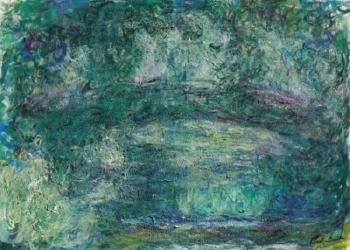 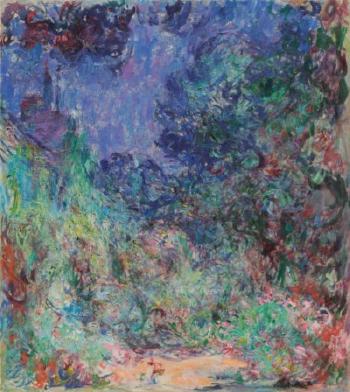